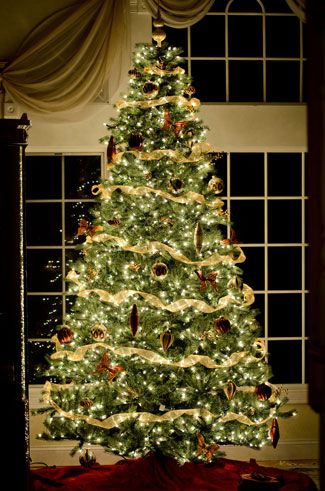 If you are looking to have a real Christmas tree in the living room this year, you will see a wide variety of species and sizes in your local lots. While there are more varieties than listed below, this will give you a good idea of the general characteristics of the holiday favorites.

Which one is right for you?

Balsam Fir
The Balsam Fir is built for ornamentation. With dense limbs and strong branches this tree can hold your heaviest ornaments and take the big globe or c-globe Christmas lights. And with the pyramid like shape and spire on the top, it’s the perfect choice for the family star or angel tree topper. The needles are short, long lasting and soft. It has a very strong evergreen scent that will fill the whole room.

Fraser Fir
Like its brethren, the Balsam Fir, the Fraser Fir is built for ornaments. It is a fairly uniform pyramid shaped tree whose branches tilt upward which gives the tree a very full and compact appearance. The underside of the needles have a silver appearance and the branches are very stiff. It is easy to get to the interior branches for hiding lighting cords. It has a milder fragrance than the Balsam Fir.

Noble Fir
A very traditional Christmas tree that is often what is used to create wreaths and garlands. Like the other Fir, it has stiff branches and good longevity. Sometimes Noble Firs can have a blue tint to them. They have the same pyramid profile as the other Fir.

Blue Spruce
This tree has short needles that can vary in color from dark green to indigo blue. The needles, unlike Fir trees, have sharp points at the end. They have a symmetrical shape and hold their needles even when dry. However, due to the prickly needles, interior decorating can be tricky! They have a very mild aroma, but if you crush the needles they will give off a resiny smell. They are a stout tree as well though and will hold ornaments well.

The White Pine
The White Pine has long (up to 5 inches!), soft, feathery needles which makes it a popular choice for garlands, wreaths and centerpieces. White pine needles will last a long time if properly watered. While a beautiful tree, this tree has soft limbs and needles and makes it only suitable for tinsel and small lights. This tree has a minimal scent and makes it a good choice for the sensitive nose.

Scotch Pine
The Scotch Pine is the most popular tree in the US with its symmetrical and dense, full branches. It has needles up to 3 inches long that resist shedding even if you forget to water! And it has sturdy branches that can support decorations and lights well. The Scotch Pine has a pleasant pine aroma, but its needles can be sharp as pins, so you may want to wear gloves when you decorate!